The defeat was scathing for the Stagonians who thought they could win until the end.

Full report in the Murdock's Marauders blog.
Posted by MurdocK at 7:00 PM 2 comments:

The Duke paced restlessly across the floor of his salon. The clatter as wagons were loaded with silverware, papers and his favorite toy soldiers was making it hard to concentrate as he reread the latest dispatch from the front.

Those bloody knights! Sons of nobles and rich merchants in the finest armour recruited into a household cavalry. All at their own expense luckily. They had begged to be allowed to go to the war  and so he had relented then the fools hung around at the back of the battlefield refusing all orders to advance. Now trusted with the defence of the flank, one lot had gone haring off to impale themselves on pikes without orders and then scampered off the field like so many rabbits while the other squadron had just stood quivering till the enemy's battle hardened troopers said Boo!   Well at least, if Rossi's infantry could hold off pursuit and some accommodation could be reached with Stagonia, the estates of those nobles, whether dead or disinherited by decree, would help pay for some mercenaries to defend the walls. The bloody levies had run after the first volley again, probably best not to trust the walls to them.

If only Franscioni's veterans can hold. Still best go check to make sure that all the best valuables are on the wagons in case it was necessary to leave in  a hurry for his familial estate in the hills.

Let the bells ring and the banners fly!

The Duke smiled wryly as he came in from the balcony, leaving the cheering crowds to carry on. He could see from the eager demeanor of the dusty courier that the news was good but he could also see by the slightly apprehensive look in his eyes that there was some shadow over the victory.

Three out of 5 infantry regiments chased off the field? Good grief! and that dull old, head strong Izzo the hero of the day? Well his long service was reward enough.  Thank goodness for the artillery, consummate professionals, too keen on plying their trade to even notice any favours. If we've taken any towns perhaps they can have a bronze bell from the church for their next cannon. Cannon  from canon. The Duke's lips twitched at his own humour.

And the citizen regiments, all dispersed! So much for the plan to get rid of all the mercenaries. Was that  Nicollo was really as smart as he thought?  Well, best praise any stragglers that came home anyway, make them feel that they fought nobly and their Duke appreciates it and that he trusts them to do better next time. Maybe that will put steel in them?

Oh and perhaps some form of civic award for the riders of the Cianti regiment, mostly sons of the richest merchants. Yes their support will be important going forward,  and besides, they seem to be able to fight.  Still the enemy seems to be following that Frenchman Henri of Navarre with his cold steel charges that that Lombardi fellow was scoffing at. Lombardi's cavalry did beat them in the end but the matter bears looking in to. As Duke, knowing things never goes astray and after all Lombardi may not be around forever.

Well, if the mercenaries and professionals are so important, perhaps an award for the Utti Regiment? Must keep them happy in my service.

and that Rossi fellow? Will have to keep an eye on him!

Posted by Ross Mac rmacfa@gmail.com at 5:07 AM No comments:

Email ThisBlogThis!Share to TwitterShare to FacebookShare to Pinterest
Labels: crossroads

Update from the Front. The Duke is pleased but worried.

Another Courier has arrived fresh from the battlefield, the smell of blood, sweat and gunpowder still clinging to him.

It seems that the battle is going well but is not yet decided. The vile Stagonians have had some setbacks but sneakily rallied in safe havens and have unlimbered their monstrous guns and having been plying them to effect. So far the Dukes men have fought bravely despite the odds and the casualties but with battles as with all games of chance, you can win a castle in the morning but be homeless by supper.

At least his spies report no signs of suspicion activity by General Franscioni or Colonel Izzo. Indeed the latter appears to be a hard drinking soldier of the old school who does his duty on the field as he sees fit but not always up on the details of administration and logistics. His Major then, perhaps? hmm.

Must have the Chamberlain investigate all suppliers of match and powder and double check the stores in the city's arsenals.
Posted by Ross Mac rmacfa@gmail.com at 10:04 AM 1 comment:

News from the front - The Duke is not pleased

News of the expected clash with Stagonia is trickling back. (The Duke has of course posted spies within the entourage of General Rossi.) This is the first outing for the Duke's army and the news has him chewing his mustache and wondering how his Colonels were selected and who they are related to, he must consult the chamberlain.

First there is the case of the Asti Spumonti Cuirrasier Regiment, ordered to advance, deploy and then proceed through the defile to the south of the village, their Colonel, supposedly a veteran of the French Wars, chose to push blindly through the gap in column, dismissing the warning of enemy in the area. When taken to task, his response was then to sulk and do nothing. Is it possible that he is in Stagonian pay? It would be best over all that he redeem himself in battle or die. 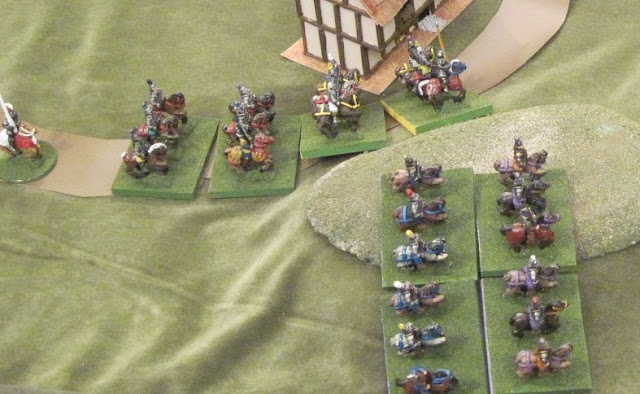 Oddly the Cianti Regiment composed of Citizen Volunteers, moved by love of their Duke to rush to arms in his defense have formed in a credible fashion despite their inexperience while the veteran mercenaries waffle. And why exactly is the brigadier lagging so far in the rear of his troops?

On the other flank, right under the eyes of General Rossi, the Izzo Regiment which had been ordered to deploy and move past the town to attack a dominating hill where the General expected Stagonian guns to deploy shortly, instead deployed in such as way as to not only prevent it self from moving past and fulfilling its orders but also blocking the fire of the gun which was deployed to fire at the town in anticipation of the enemy occupying the town.

Is this a case of a regimental commander feeling that he knows better than the general?  Was this a refusal to risk his regiment for the greater good? He will bear watching. His finances and family connections may also need investigation. or is it possible that General Rossi secretly issued orders which my spies did not hear? (Hmmm.Well, we'll see how he does in this campaign. I'd best see if I can insert an extra spy into his household.) 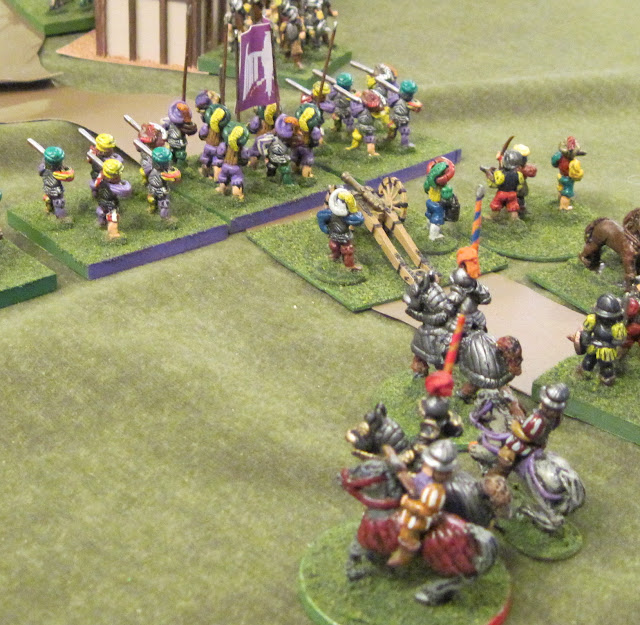 Chamberlain! Double the guards on the city gates and keep a sharp eye out for the next courier!

Posted by Ross Mac rmacfa@gmail.com at 5:23 AM 2 comments:

Email ThisBlogThis!Share to TwitterShare to FacebookShare to Pinterest
Labels: crossroads 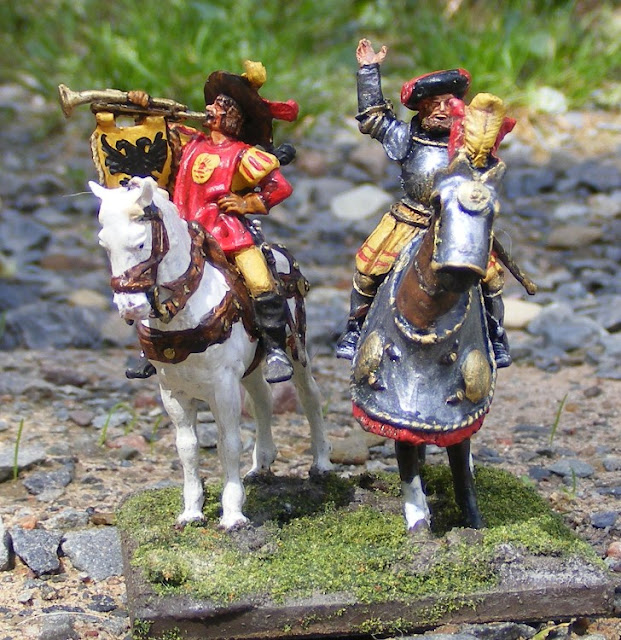 The Duke during his time serving the Emperor.